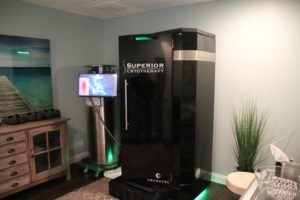 Cold therapy is commonly used as a procedure to relieve pain symptoms, particularly in inflammatory diseases, injuries and overuse symptoms. A form of cold therapy (or stimulation) was proposed 30 years ago for the treatment of rheumatic diseases. The therapy, called whole-body cryotherapy (WBC), consists of exposure to very cold air between -100 to -200 Degrees Fahrenheit in special temperature-controlled cryochambers, generally for 2-3 minutes. Cryotherapy is used to relieve pain and inflammatory symptoms caused by numerous disorders, particularly those associated with rheumatic conditions, and is recommended for the treatment of arthritis, fibromyalgia and ankylosing spondylitis. In sports medicine, cryotherapy has gained wider acceptance as a method to improve recovery from muscle injury and soreness in athletes. Cryotherapy shows positive effects on the muscular enzymes creatine kinase and lactate dehydrogenase, and it should be considered a procedure that facilitates athletes’ recovery.

Many have reported a rush of energy, increased mental awareness, and a significant lift in mood after just one session. When you exit the chamber, nutrient rich blood will rush to the extremities and the release endorphins will give a sense of happiness and excitement.

There are many autoimmune dysfunctions and diseases that affect millions. Cryotherapy has been the go-to modality for people controlling their pain without the use of powerful and addictive drugs. It is also beneficial for people in rehabilitation. Cryotherapy has given relief to those suffering from rheumatoid arthritis, fibromyalgia, chronic back pain, multiple sclerosis, and osteoarthritis to name just a few.

Nearly 40 million in the US alone suffer from chronic sleep disorders every year. A natural and safe alternative to over-prescribed medication is cryotherapy. Reports of significant improvement in their quality of sleep has been reported from many.

Two key elements of youthful skin include maximizing cellular regeneration and minimizing toxins. With as little as one session per week, cryotherapy can enhance the regeneration of cells as well as expel toxins. Collagen is what gives our skin strength and elasticity. As we age, the production of collagen declines leading to wrinkles and sagging skin.

It also affects the immune system which allows for healthier, happier skin. Cryotherapy offers many rejuvenation benefits without the need for expensive methods, many of which involve chemicals and downtime.  Cryotherapy on a regular basis has been linked to collagen production resulting in smoother, tighter skin and the reduction of fine lines and wrinkles. Other positive effects of regular cryotherapy include decreasing cellulite and inflammation. It also soothes skin which can help with sunburn, eczema, psoriasis, and dermatitis.

Excerpt From a Study:

WBC is not harmful and does not induce negative general and specific effects in athletes. The published studies concentrate on physiological, biochemical and haematological parameters, which are not negatively modified; however, specific studies on physical parameters and the effects on recovery from injuries should be performed. WBC reduces pro-inflammatory responses, decreases pro-oxidant molecular species and stabilizes membranes, resulting in high potential beneficial effects on sports induced haemolysis, and cell and tissue damage, which is characteristic of heavy physical exercise. Conversely, it does not influence immunological or hormonal responses, with the exception of testosterone and estradiol, or myocardial cell metabolism. Interleukin concentrations are modified by WBC, which induces an anti-inflammatory response.

Chiropractic | Why Dr. Smith Chose to be a Chiropractor